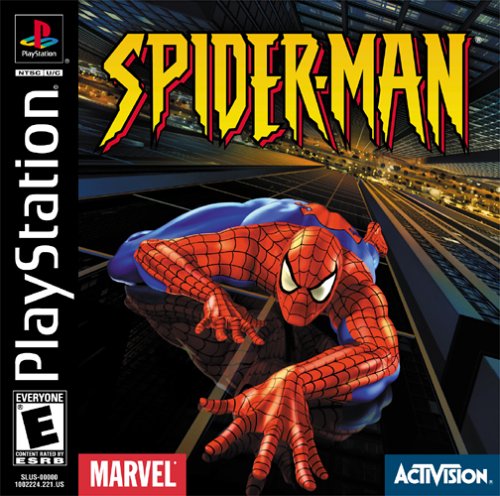 Take a look overhead--Spider-Man is arriving to the PlayStation just in time. As the beloved photojournalist-cum-webslinger, you'll freely explore New York's skyline, sewers, and hideouts to fulfill several missions. Use Spider-Man's superhuman strength to fight such notorious foes as Scorpion, Venom, and Rhino. Use his spider abilities to spin webs (any size) to disable and detain bosses, swing around buildings, and creep along walls and ceilings. And thanks to your spider-sense, you'll detect impending danger from a distance. There is no wealth or fame at the end of this game, however; action is your reward. .com ---- Whether you're a fan from the '60s or not even remotely familiar with the Spider-Man comic, you will get caught in his web. You'll see that despite its few flaws and the limitations of the PlayStation hardware, Spider-Man is the best based-on-a-superhero video game ever released. A crime has been committed and (as often happens) our hero has been framed. As the game progresses, you'll find that all is not as it seems and that many of Spidey's enemies, including Venom, Carnage, Mysterio, and Rhino, are all out to squash the Spider's quest to clear his name. Fortunately, Spider-friends, such as Daredevil, Human Torch, and Punisher, are here to help Spider-Man and keep the story moving. Like the comics, ol' webhead can climb most walls and ceilings, swing from rooftop to rooftop and, of course, do whatever a spider can. With his constant webslinging and acrobatic hand-to-hand fisticuffs, it's easy to feel that you are Spider-Man. The characters and scenery are nicely re-created here by making great use of the aging PlayStation's graphics. Spidey's ability to climb walls and ceilings does present problems with camera angles from time to time, occasionally making it tough to watch Spidey as he fights his way through some of the game's levels. While it can be frustrating, the overall camera work and graphics of Spider-Man are still amazing. Also, Spider-Man's controls can at times be less responsive and accurate than they should be, and the music is surprisingly subdued and flat, but most true believers can bear these problems until Spidey saves the day. In fact, the gameplay is so good, most seasoned gamers will devour the game in day or two, which makes Spider-Man a woefully short game. Cherish the time you have in these red and blue tights; this game is escapism at its best. --Mark Brooks Pros: * Easily, the best comic-book-based game ever released * Very nice graphics that capture the look and feel of the comic * Easily accessible and fun action title Cons: * Occasionally sloppy camera work, controls, and inaccurate firing * Finishing the game so quickly is upsetting
Show More
Reviews