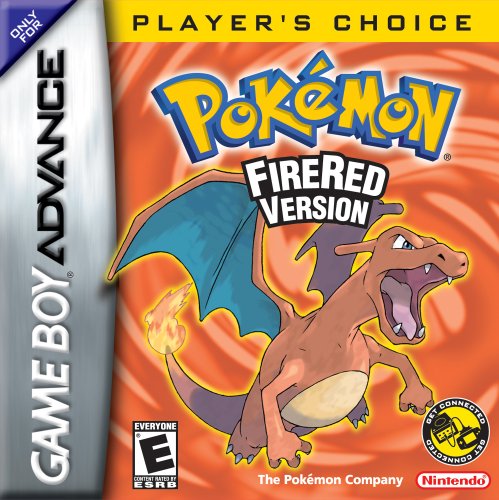 Players battle, trade and collect Pokémon using a Game Boy Advance Wireless Adapter, which is sold separately. Using the new chat function, players can exchange game info., talk battle strategy or just shoot the breeze. For the first time, fans can access, trade and battle the Pokémon from their favorite games. More than 100 Pokémon wait to be discovered. From the Manufacturer --------------------- The world of Pokémon has expanded. Pokémon technology makes its next quantum leap. We've seen the future, and it's all about Pokémon FireRed and Pokémon LeafGreen ( /exec/obidos/ASIN/B000067P9O/%24%7B0%7D ) (sold separately). This package also includes a bonus Trainer's Guide filled with tips and other information. The new games are set in Kanto, the region where Pokémon first took root and exploded into a major phenomenon, and the latest titles stuff in tons of exciting new features. One thing's for certain: when Pokémon FireRed and LeafGreen get into Trainers' hands, Pokémon fans stand to become the coolest, most connected gaming community in the world. Features * Return to the world of Kanto originally explored in Pokémon Red ( /exec/obidos/ASIN/B00000IYEQ/%24%7B0%7D ) and Pokémon Blue ( /exec/obidos/ASIN/B00000IYER/%24%7B0%7D ), where the adventure is brought to life better than ever with dazzling GBA graphics and dozens of surprising new features. * Experience the original duo's plot, prove yourself in the region's Pokémon League while single-handedly bringing down Team Rocket, plus pursue major new storylines that will add unexpected twists. * Once you prove yourself, you'll be able to bring the Pokémon you caught from Pokémon FireRed and Pokémon LeafGreen into Pokémon Ruby ( /exec/obidos/ASIN/B000084313/%24%7B0%7D ), Pokémon Sapphire ( /exec/obidos/ASIN/B000084314/%24%7B0%7D ) and Pokémon Colosseum ( /exec/obidos/ASIN/B00009WAUF/%24%7B0%7D ) for GameCube! * Every Pokémon FireRed and Pokémon LeafGreen Game Pak comes with a GBA Wireless Adapter -- trade, battle and connect with your fellow Trainers wire-free! When you get your copy of Pokémon FireRed or LeafGreen, you'll also nab Nintendo's cutting-edge peripheral: the Game Boy Advance Wireless Adapter. Upcoming Nintendo titles will feature Wireless Adapter gameplay in a variety of brilliant ways, but Pokémon FireRed and LeafGreen will be the first to venture into the wireless gaming realm on the GBA. The Pokémon community will be brought together like never before. When used with the Wireless Adapter, Pokémon FireRed and LeafGreen will make you the hub of a thriving wireless community of Pokémon players. As other wireless Trainers come within reach of your adapter's range, you'll be able to communicate and play games together. As players leave your range, they'll vanish from your wireless network. It's an unbelievably cool way to tap into the fantastic power of the Pokémon gaming community. Much of the wireless gaming in Pokémon FireRed and LeafGreen is concentrated in the Kanto region's Pokémon Centers, where you can join up to 39 other wireless Trainers in the Union Room for a free-for-all, or connect with just two or three in the Direct Corner. Battling and trading will be radically transformed by wireless possibilities when Pokémon FireRed and LeafGreen hit the streets. Check out the Screenshots Gallery to see images of this new feature in action. The Big Picture With Pokémon FireRed and LeafGreen coming out soon, we thought it'd be handy to break down the ways in which the games are connecting to create one gigantic Pokémon world. Provided that all gameplay requirements are met, you can: * You can connect Pokémon Ruby/Sapphire to Pokémon FireRed/LeafGreen and trade/battle Pokémon between the games. * You can currently connect a Pokémon Ruby or Sapphire GBA Pak to the Pokémon Colosseum GCN game to trade/battle Pokémon between the two systems. * Shadow Pokémon that you Snag in Pokémon Colosseum's Story Mode can be used for competitions in Pokémon Colosseum's Battle Mode. * When the new GBA games are released on September 9, you'll be able to trade/battle Pokémon between Pokémon FireRed/LeafGreen and Pokémon Colosseum for the first time. Gotta Breed 'Em All We've witnessed many a debate over which region's got the greatest "starter Pokémon," and Pokémon Gold and Pokémon Silver fans always argue that Cyndaquil, Chikorita and Totodile reign supreme. Don't you wish you could settle that argument with a Pokémon Colosseum battle? You can. In Pokémon Colosseum's Story Mode, you can snag the triad's next evolutionary step -- Quilava, Bayleef and Croconaw, respectively -- then send them to Pokémon Ruby and Sapphire, where you can breed them in Hoenn's Day Care. If you breed a female Pokémon with a male that has a compatible Egg Type, you'll be sure to hatch the female Pokémon's earliest evolutionary form. With it, you can settle the "starter Pokémon" score anywhere you want: in Hoenn or back in Orre!
Show More
Reviews