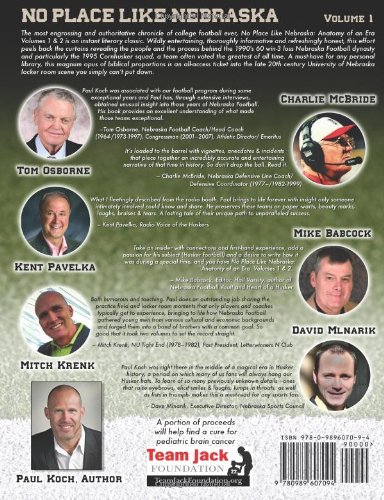 Tallying an unbelievable 3 National Championships and another near miss within a five year span, the 1993-97 University of Nebraska football squads manifested three perfect undefeated seasons on their way to an unheard of 60 win & 3 loss record at the advent of the BCS era. Nearing the 20th anniversary of this greatest 5-year reign in college football’s modern era, Paul Koch’s “No Place Like Nebraska: Anatomy of an Era” Volumes 1 & 2 (sold separately) revisits the many participants to candidly gather insights & summarize how that magical period came to be. And let’s face it: we all know WHAT those teams accomplished, but this book goes far beyond the pale by vigorously delving into both HOW success happened and -most importantly- WHY it happened, which is why this book is so deliciously entertaining. Searching a yard wide and a mile deep into Nebraska Football, it’s a voluminous revelation of heartfelt, behind-the-scenes anecdotes from the heroes, visionaries & rogues of that era. With an insider’s all-access investigation, you will marvel at the complex interplay of the personalities, the brave changes & challenges within Dr. Tom Osborne’s 25 year program, the rabid Husker Football fan-base, and witness more than a few other surprises encountered on their road to victory. It's a deeply personal exploration into the concepts of leadership, learning & maturing, coming together & overcoming hurdles, not to mention the laughs & craziness inherent to top tier college athletes at the turn of the century. Tying together the accomplishments of its greatest citizens past & present, its unique climate & culture, and a hardiness and rugged individualism passed down from its founding pioneers, it’s a mosaic of a region told through the prism of a venerated college football program at its all-time peak. Simultaneously paying homage to the participants while also exposing them as fallible (and sometimes foul) creatures, it’s a realistic revealing of a time before football ‘turned soft’. The book not only pays homage to the participants, but actually renews a spirit of hope in the sport by exposing the true underpinnings & leadership qualities necessary for sustained excellence while dispelling many prevailing media-generated falsehoods about that place and time by taking you behind-the-scenes and beyond the curtain. A must read for any sports fan looking for the laughs, tears and insights, you’ll have a hard time putting it down. What people have to say: “..it took me back in time to the sweaty locker rooms, the summer heat coming off the artificial turf in Memorial Stadium, to the sound of grease pens on white boards, the hours of watching film and pumping weights underneath West Stadium to seeing the training table personnel greet you with a smile after a long day to the smell of Runzas as we left the tunnel to seeing the Red wave of clothing in visiting stadiums to the smell of the ocean on bowl trips to emotional hugs & post-game rituals of hard fought wars....there was no place like it, and there is no book like this one.” –Chad Stanley, former player/coach Paul Koch was associated with our football program during some exceptional years and Paul has, through extensive interviews, obtained unusual insight into those years of Nebraska Football. His book provides an excellent understanding of what made those teams exceptional. –Tom Osborne, Former Nebraska Football Coach/Head Coach,Congressman,Athletic Director/ Emeritus It’s loaded to the barrel with vignettes, anecdotes & incidents that piece together an incredibly accurate and entertaining narrative of that time in history. So don’t drop the ball. Read it. -Charlie McBride, Former Nebraska Defensive Line Coach/Defensive Coordinator *A portion of proceeds will go toward the Team Jack Foundation in an effort to find a cure for pediatric brain cancer.
Show More
Reviews

No Place Like Nebraska: Anatomy of an Era, Vol. 1