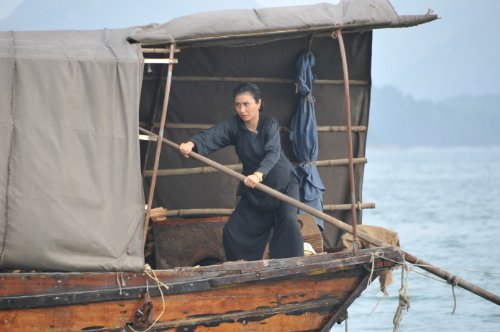 Brand : Well Go Usa Inc
from USA
to INDIA
in 5-8 days
At your doorstep by Aug 03  to Aug 06 with standard delivery

In the early 1990s, Bo Wah Chuen (Aaron Kwok) attracts great attention as a business executive in the Imperial East India Company of Hong Kong, his prominence overshadowing even that of his British superiors. However, twenty years ago, when he takes the company s entry test, all he has to show for himself is the plea, I could read and write . His rise to prominence has as much to do with British s imminent return of Hong Kong to China, as it has to do with his considerable ability. To the astonishment of many, Bo Wah Chuen looks nothing like a Chinese. As a child, he has to endure much jeering as he looks nothing like his six siblings. People are amazed at the sight of a Caucasian looking fisherman in colonial Hong Kong. Though he is desperate to discover the origin of his peculiar features, every time he asks his parents, all he could get out of them is a good beating. Chuen s father dies in a fishing accident. His mother (Josie Ho/Nina Paw) incurs his father s debts, forcing her to send her older children off to an orphanage, and the younger ones to various foster homes, in order to lessen the financial burden. Meanwhile, thanks to his friend Lau Chiu Lik (Joe Leung), Chuen is initiated into the Imperial East India Company. Starting out as a lowly office assistant, Chuen gradually climbs up the company s hierarchy, while attending night school on the side. During this crucial period, he is befriended by Fion (Annie Liu), a westernized, upper-class lady who provides Chuen with much needed advice on his conduct in the parochial world of a colonial trading company. In the meantime, however, his wife Tai (Charlie Yeung), similarly from a fishing background, feels increasingly isolated from this new reality. With Chuen s help, his mother turns herself from an illiterate wife of a fisherman to the first woman in Hong Kong to acquire a boating license. The family is finally united. On the eve of Hong Kong s handover to China, as the British flag is lowered down in the stormy weather, Chuen discovers the secret of his origin. DVD EXTRAS Trailer English Subtitles
Show More
Reviews