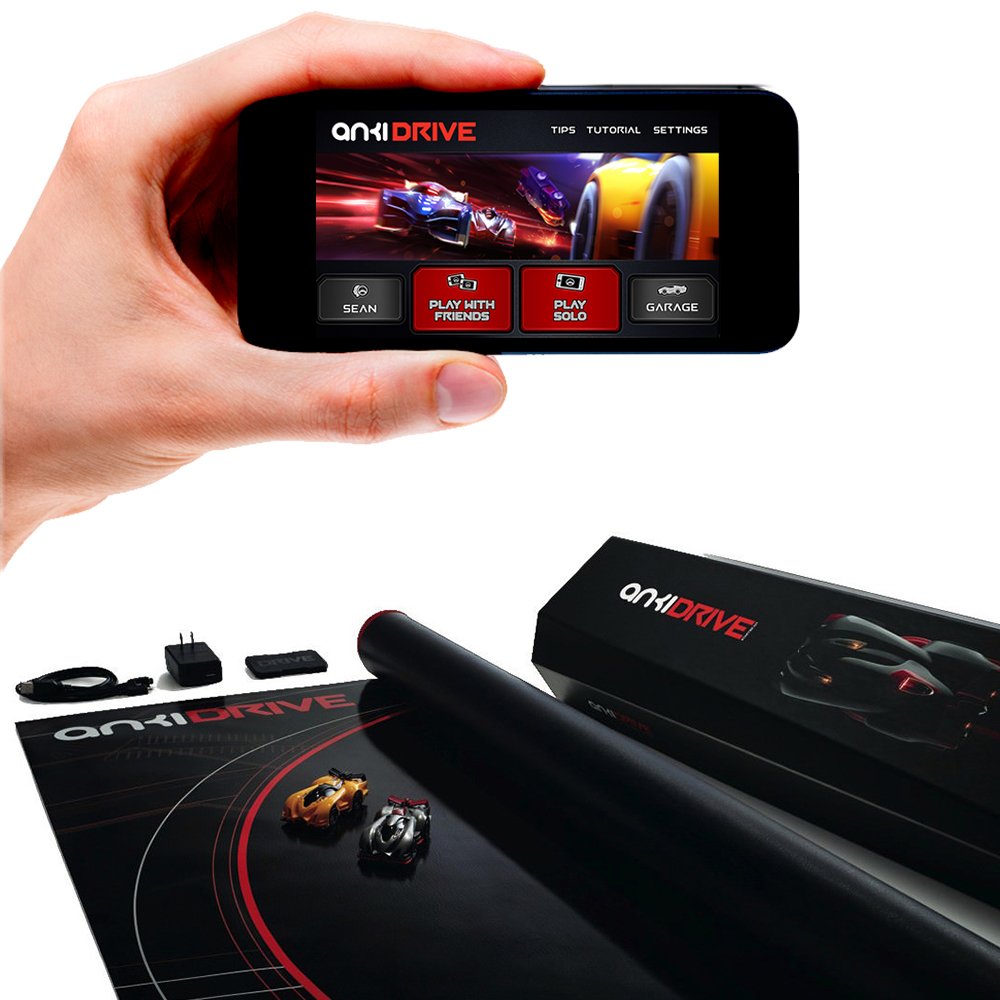 Race Real Robot Cars Part toy, part video game, Anki DRIVE is all-out high-speed family fun. You can go head-to-head with your family or put your skills to the ultimate test against in-game Commanders in this first-of-its-kind battle racing game. From the Manufacturer --------------------- Gameplay Battle up to four Anki DRIVE cars per track and upgrade your vehicles with weapons and gadgets for complete race mayhem. Choose between two exciting game modes: Battle Mode and Race Mode. Whether you’re the first car to score a set number of takeout wins or you're in an all-out fight to the finish line, you’ll be at the edge of your seat no matter what mode you choose. Feeling friendly? You also have the option to team up with your friends, family or the in-game commanders to battle against any opponents you want to challenge. Ready, Set, Battle. With your iOS or Android device, everything your family needs to play is in the Starter Kit. Open the box, unroll the track, and unleash two unique robot car warriors: Boson, the Fast Attacker, and Kourai, the Agile Striker. Challenge friends to a head-to-head battle, or see if you have what it takes to beat a self-controlled robot car. Starter Kit includes: 2 robot cars (Boson and Kourai) 1 race track (Starter Kit) 2 charging cases + 3-port power cord 1 tire cleaner Getting Started To get into the race, download the free Anki Drive app from the App Store or Google Play. Players must have an iOS or Android device to control a car. Check compatibility at Anki.com/devices. Robot Race Cars The Starter Kit comes with Boson and Kourai. Under the hood of each Anki DRIVE car is a built-in computer. This hardware gives every vehicle the ability to effortlessly stay on the track as you fire at opponents and maneuver your position. Players can customize each car with exclusive upgrades using points earned in-game: increase a car’s speed on the track, boost weapons, and much more. Add an expansion car (sold separately), and you can get even more friends and family in on the battle-racing action. The Commanders Take competitive gameplay to a whole new level as enemy Commanders of all ranks and styles are waiting to take you out! Prove yourself against Winger, Shadow-X, and Fuzz in single player to unlock more difficult foes. Once unlocked, you can add a Commander to your multiplayer games, or even play alongside them in Team Mode. Each Commander has a unique look and personality as they take control of their cars just like real-life players. Be smart about choosing an opponent as every Commander has their own special benefits and challenges. The Race Track Roll out the 8.5 x 3.5 feet Starter Track for the ultimate race. Turn any flat surface in your home into your own battleground. The track is durable and holds up to paw and footprints. Add an expansion track (sold separately) to boost the family fun and challenge even the most skilled drivers. Expand the Game with Additional Anki DRIVE Cars (Sold Separately) Each expansion car has its own deadly arsenal of exclusive upgrades, weapons and gadgets. Find the ones that best match how you like to battle. Add them to your line-up of robot warriors to get even more friends and family in on the awesome robot action. Expand the Game with Additional Anki DRIVE Tracks (Sold Separately) Own even more of the road with Anki DRIVE expansion tracks. Each track features unique obstacles to challenge even the most skilled drivers. About the Startup Who is Anki? We’re out to transform the world’s understanding of what’s possible with robotics and AI. We combine physical products with digital capabilities to create profound experiences. For too long robots have been either uninspiring or unattainable. Our robots are different. They have heart. They bring a smile to your face. They make magic. Which is good – because technology is only as important as how it makes people feel. It’s time to unleash the awesome potential of robotics. We’re Anki, and we’re designing the future. About Anki Anki was founded in 2010 by Carnegie Mellon Robotics Institute graduates. Our first product, Anki DRIVE, was introduced in 2013 and was one of Time Magazine’s 25 best inventions of the year. In 2015 Anki was named one of the Top 50 Most Innovative Companies by Fast Company, and #1 in robotics and gaming.
Show More
Reviews